Leading up to November 8th, we will be looking at major U.S. presidential elections and the impact that they have made on the country. Check out 1800 and 1876. Our last blog covered the election of 1876, fast forward to the 1900s. As the 1948 election approached, incumbent President Harry S. Truman had grim election chances. The public perceived Truman as a weaker leader than four-term President Franklin D. Roosevelt, who Truman had replaced due to Roosevelt’s death in 1945. There was, once again, a split within the Democratic Party. Truman’s former secretary of commerce, Henry Wallace, was running for president as a member of the Progressive Party, leading pollsters, the public and other politicians to believe that Truman would not have a successful run.

The Republican candidate, Thomas S. Dewey, was the clear favorite to win. A Gallup poll, taken in mid-October and published the day before the election, gave Dewey a lead of 49.5 percent to Truman’s 44.5 percent. Truman believed he had lost the election when, at midnight on Election Day, NBC reported that although Truman was ahead by more than one million votes, Dewey was still expected to win. At four in the morning, Truman was awakened by his secret service agent to the news that he had gained a lead of two million votes. It was then that Truman realized he had won the election. Truman received 49.5 percent of the vote to

Photo from the Chicago Tribune of “Dewey Defeats Truman” Headline from November 3, 1948, via Wikipedia.

Dewey’s 45.1 percent, and 303 Electoral College votes to Dewey’s 189 votes.  One of the most well-known photographs of Truman’s time in office is of the President holding a copy of the Chicago Tribune with the inaccurate headline “Dewey Defeats Truman”.

The 1948 election illustrated the importance of a strong, late-game campaign that connected a candidate with voters and introduced the potentially erroneous aspects of polling. Truman campaigned energetically throughout the fall with train tours across the country, including “whistle stop” speeches delivered from the end of the presidential train. Truman’s connection with voters on the “whistle-stops,” as well as careful politicking with the key New Deal demographics, allowed him to reverse expectations on Election Day. The Republican nominee, Thomas S. Dewey was a strong candidate, having lost a close race against Franklin D. Roosevelt in 1944; however, his careful campaign against Truman, which stifled his previous combative style, resulted in bland speeches that left little impression on the electorate.

Gallup had significant success in presidential polling prior to 1948; such as correctly predicting the outcome of the 1936 election. After running their final poll in mid-October of 1948, the company did not believe that voters would change their minds between then and the election. This error in judgement caused them to miss indicators that voters had begun to shift support away from third party candidates and back to the major parties, leading to the Truman victory. 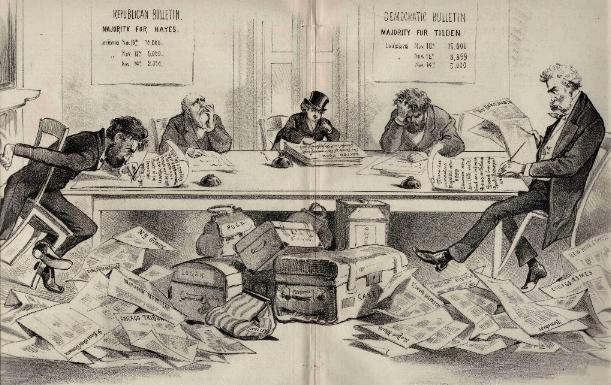 Throughout history, the race for President of the United States has been a contested affair closely watched by Americans and others around the world. Leading up to November 8th, we will look at major U.S. Read more…